Money Making Opportunity
The platform provides opportunities to earn by publishing exciting content, providing its resources, as well as inviting friends
No Censorship
Peer to peer technology makes the application entirely decentralized and impossible for any regulator or provider to block it.
No In-App Advertisements
The application has no in-app advertisements, features and functionalities to be paid for or any other annoying means of monetization
Crypto Economy
Mediacoin cryptocurrency is used to ensure content sharing between users. You can obtained it by publishing or sharing digital content within the network.
Social Network
Users can create public channels, make playlists, leave comments and likes.
Free For All
You will get an absolutely free access to an enormous amount of digital content
Secure&Private
The application does not require that users share their contact details, location information or IP addresses. 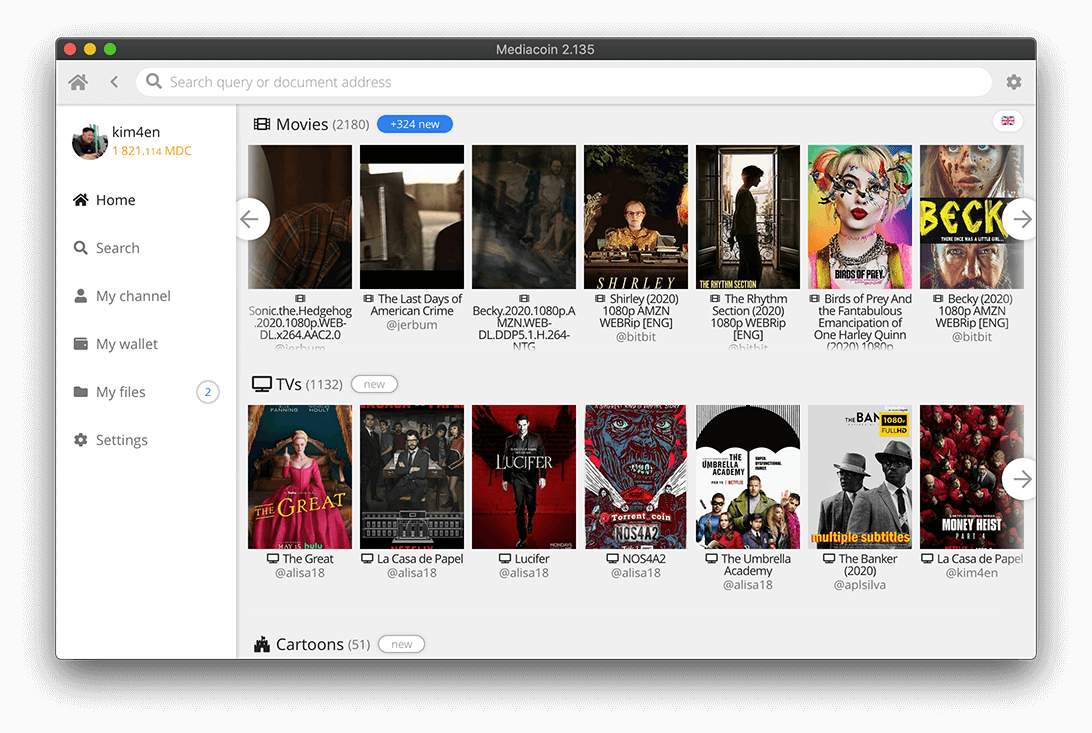 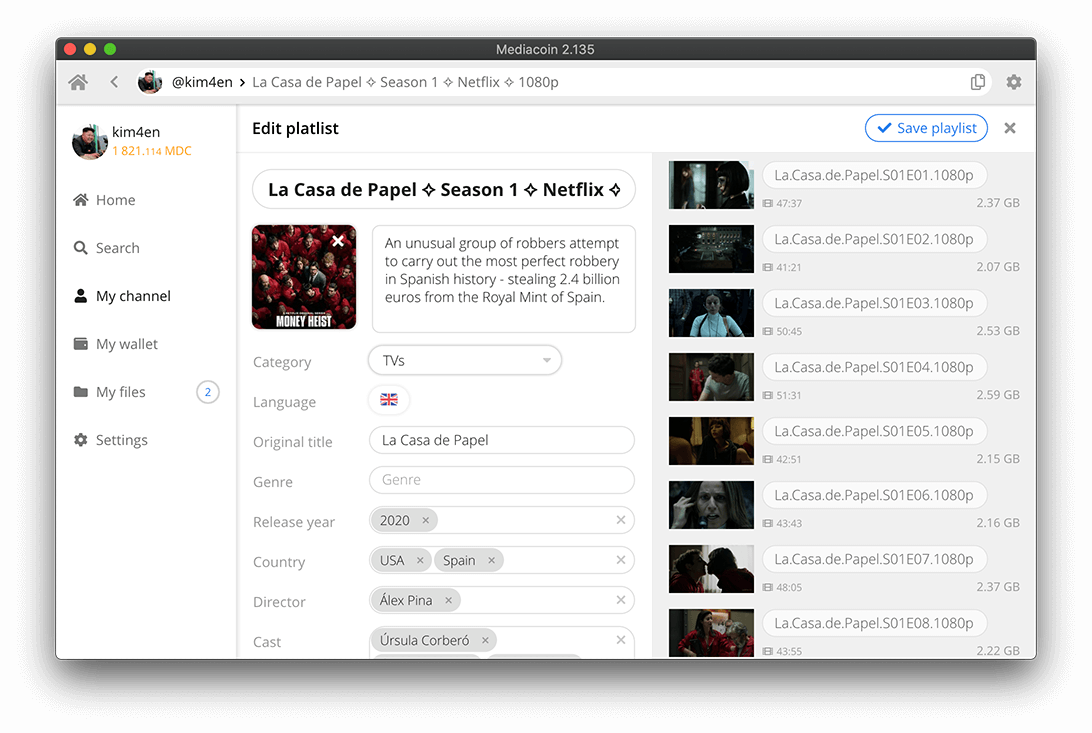 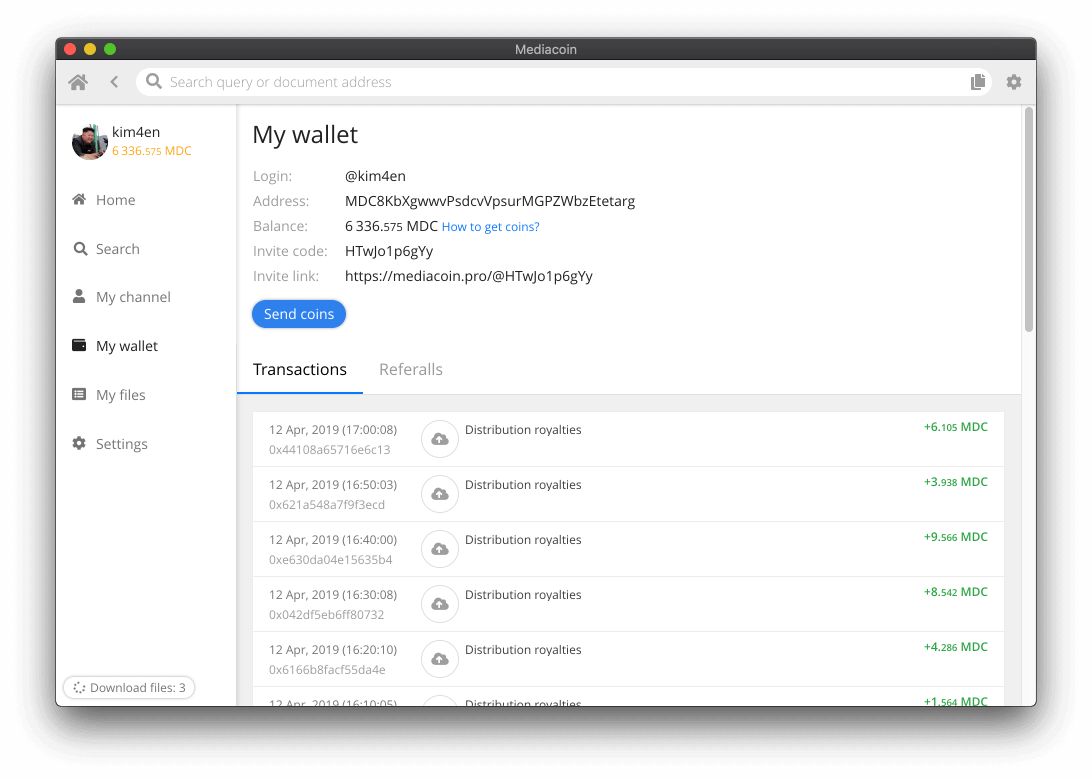 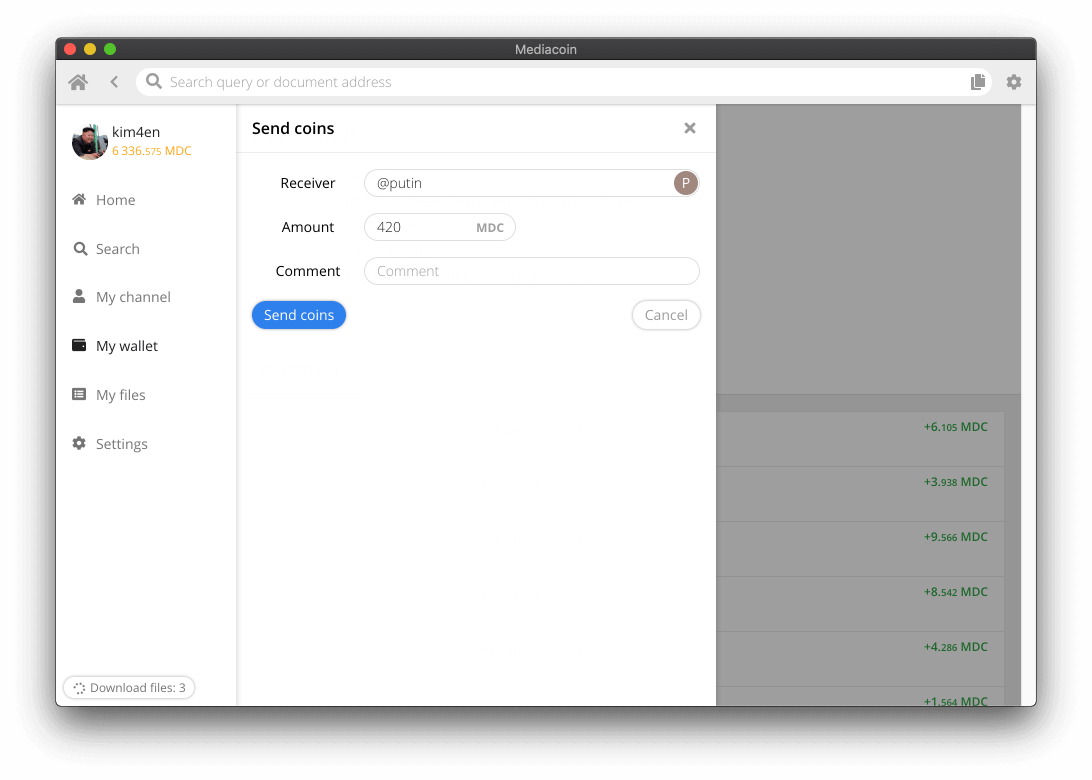 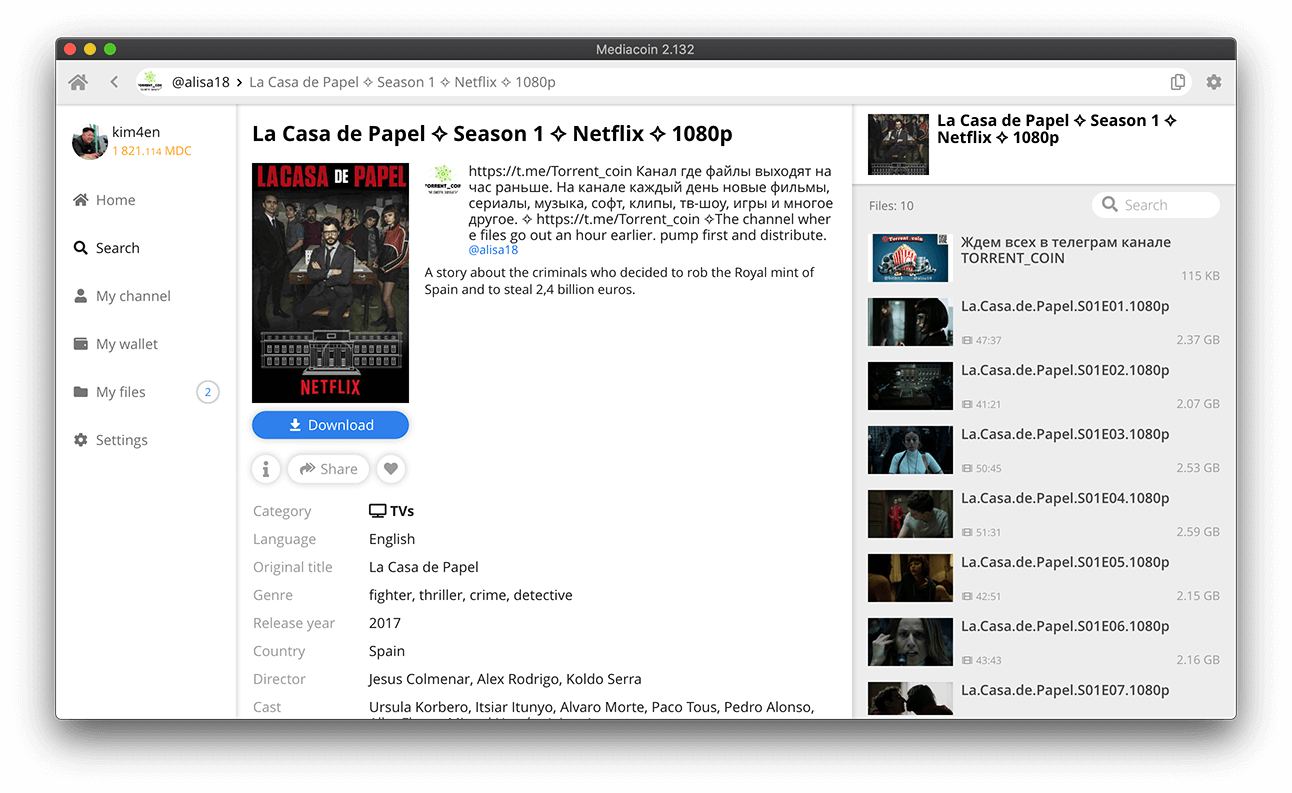 Whom is Mediacoin targeted at?

Miners
Use your computer resources to mine tokens

Rewards For Sharing Files
Users will be rewarded with internal tokens for every single file sharing. The reward depends on the size of the file shared. 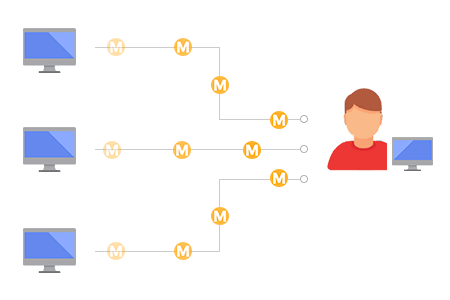 Royalties
The author of the original file hosted on the network will be paid a royalty percentage on each file download by other users, even being offline 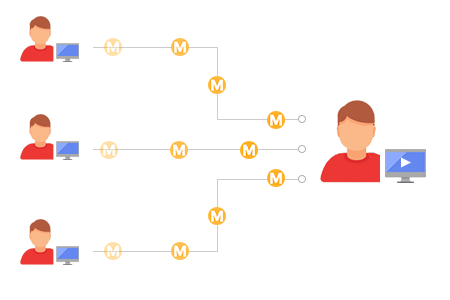 Referral program
The affiliate program allows you to invite new users of the service, increase the free traffic limit and receive a percentage of the tokens your affiliates earn on an ongoing basis. 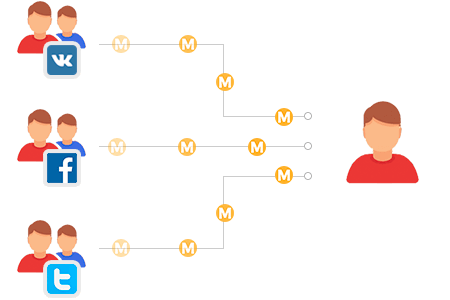 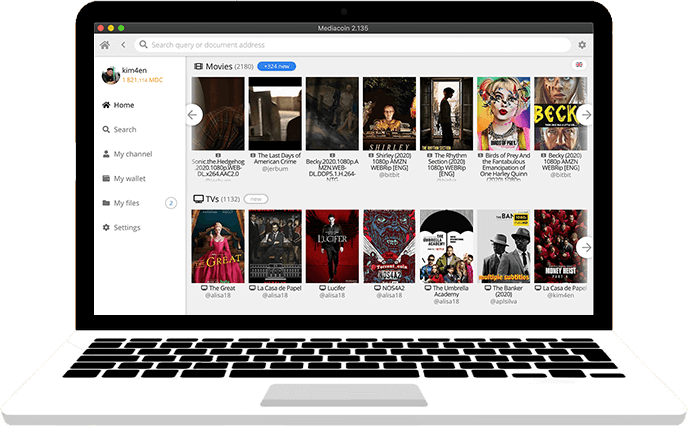 Our mission is to create a user-friendly decentralized file sharing network free from intrusive ads and hard censorship. To make the data sharing process completely confidential and simplified.

Mediacoin offers authors opportunity to make money from their content without using embedded ads and other means of monetization. The platform allows getting a fair reward for users’ interest, unlike the proposals by modern monopolistic advertising systems.

Service developers decided to try a groundbreaking idea: to remove any middlemen, enabling consumers and authors to enter into direct interaction and make the content absolutely public and free from censorship.

Development of the first version of the blockchain platform, kernel, cryptography
Release of the project’s landing site in Russian

Improvement of the full-text search relevance score.
Release of the Mediacoin 1.0 Block Explorer
Release of the 32-bit version of Windows
Mediacoin 2.0 concept development

The MDC emission scheme amendments (using the Proof-of-Activity mechanism by the time-based shared volumes and Proof-of-Stake algorithm)
Cancellation of file download limits
Mediacoin 2.0. Alpha Release
Development of the Mediacoin 2.0 desktop application. Modification of the structure of files and documents storage on the network, access to files from different drives.
Closed testing of the client software.

Beta release of Mediacoin 2.0 Desktop Version
Release of Mediacoin 2.0 Block Explorer
Open blockchain node API testing.
Getting a MDC token listed on a cryptocurrency exchange
Launch of the Bounty Program
Evolution of the client software: enhancement of the software stability and speed; introduction of subscription and notification functionality

Release of the open blockchain node API for developers.
Development of the client code, a basic cryptography on github.
Getting a MDC token listed on other cryptocurrency exchanges
Switching to IPv6 to increase file sharing speed
Desktop software enhancement: integration of the torrent protocol, torrent client software, multilingual platform support, language settings for the viewed content.

Content pricing functionality.
Desktop Software improvement: adding subscriptions and notifications functions.
The first version of the p2p Web player with the ability to play content from the Mediacoin network on any websites.

How does the network ensure privacy?
All published content is hosted on users’ machines. It is not subject to censorship and is completely anonymous. The network does not have any central nodes, so it can be blocked neither by a provider nor by any other regulator.
Why do I need the cryptocurrency?
A special internal cryptocurrency, Mediacoin (MDC), has been introduced to keep a balance between those who download content and those who share it. Participants share content in exchange for virtual money. The more content users share, the more MDC tokens they get in his/her account.
What content can I publish?
Lack of censorship and peer-to-peer technology allows users to publish any content. Users can give likes/dislikes, leave comments to content. A file rating is based on user ratings.
How does Mediacoin differ from file sharing networks and torrent trackers?
Most websites and social networks are profit-oriented. They use content of their members and make users view intrusive advertisements. Mediacoin is a non-commercial project, designed to fairly reward content authors and network users.
The platform benefits are as follows:
How can I earn Mediacoin?
The system rewards members for sharing files, publishing content and attracting new users with the internal digital currency, Mediacoin (MDC). The amount of the reward directly depends on the size of the file: the larger the file you share, the more tokens you receive.
What are the principles of issuing new tokens in the system?

Mediacoin tokens are issued on the time-related basis according to logarithmic dependence. 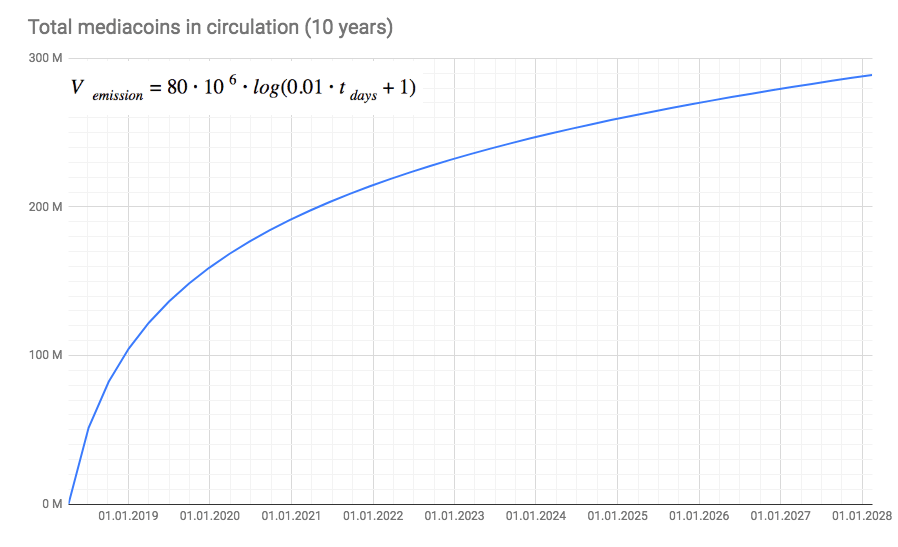 As a result, nothing limits the total number of MDC (as in case of Bitcoin, for example). The issuance of tokens is kept indefinitely. However, over time, the issuance rate decreases significantly, verging on linear dependence (including a stable inflation rate of 2-3%)

Can I download content without registration?
In order to download a file you need to download the desktop software and set up . a cryptocurrency wallet. Just create a login and password. You are not required to enter any personal data.
What should I do if I forgot my password?
The combination of your login and password is actually a private key to access your funds.
It is important to remember that the password cannot be changed or restored in the future.
Where can I sell and buy Mediacoin tokens?
Mediacoin (MDC) is currently available for sale/purchase at the crexsoft.com cryptocurrency exchange Currency pairs: MDC/RUR, MDC/USD
Have questions? Write us.